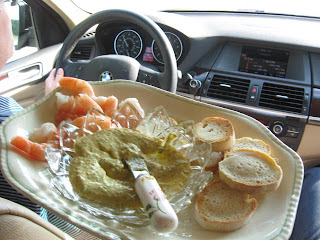 Life is a series of adventures, isn't it?  And, I love the way the pieces and parts of life weave together.

Way back in 4th grade, I was put into the beta test group of advanced kids.  I was lucky enough to spend the balance of my grade school, junior high school and high school years with a lot of those folks.  Along the way, other grade schools fed into the junior high then other junior highs fed into the high school.  So, along the way I met new friends.  One of those is a fellow named Steve.  Steve and I kept in touch for many years and I got to know his wife, Pam.  Then, life interfered and we lost touch.

Fast forward to 2004 when I met Connie.  I winked at him on match.com.  He responded.  We corresponded then met for dinner at the restaurant of my choice:  Sangiovese.  We got married a couple of years later.

Connie plays bridge.  He was talking to one of his fellow bridge players about this blog.  She said one of her best friends had a blog.  That Skinny Chick can Bake by Lizzy Do.  She introduced us.  Liz was totally delightful.  We started chatting and she told me where she lived.  I commented that some friends I'd lost track of used to live right about there.  Well, what do you know,  Pam and Steve live across the street from Liz and Bill and they're the best of friends.  Small world, isn't it?

We all got together for dinner and had a lovely time.  This past weekend it was time for another adventure.  We were going to go to Bonge's Tavern.  Now, Bonge's is one of those destination restaurants.  It was originally the local bar in a community named Perkinsville.  Many years ago, it was converted to a restaurant.  You get there early and tailgate in the parking lot.  After a long while (like a couple of hours) your party's name is called and you're seated for a fantastic dinner.  We gathered at Liz and Bill's house at 4:30.  Liz was finishing up taking some photos of her blue cheese gougeres. 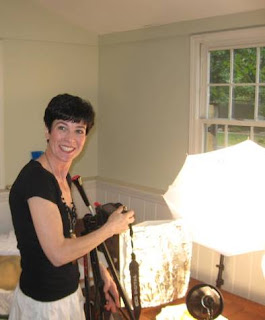 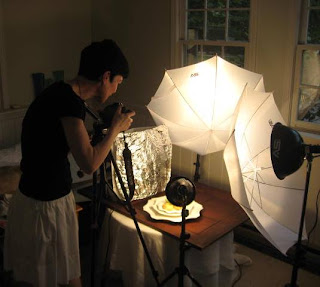 And, Lambeau was helping. 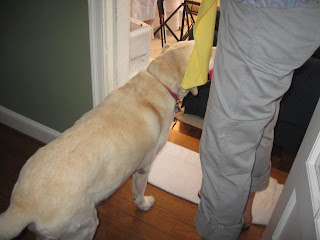 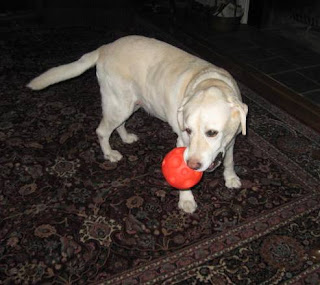 Head on over to Liz's blog and you'll be able to make those yummy gougeres yourself.

We piled into Liz and Bill's car and headed north.  Bill and Connie in the front seat.  Steve, Pam and me in the back seat.  And, Liz in steerage - the jumpseat in the WAY back.  She was there with the cooler with my shrimp crostini and Pam's cooler with the wine and the container with the gougeres.  Since they were packed warm and she didn't want them to steam, she took the top off the container.  The aroma of blue cheese wafted through the car.  We probably all looked like a bunch of pups with our noses in the air sniffing.  YUM!  A couple of gougeres were tested on the way north.  They were every bit as good as they smelled.  Finally, we were at Perkinsville.  See the fellow in the left in the photo? 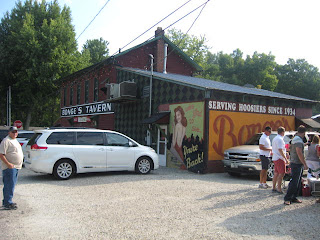 Well, he came up to the car and said they were full up for the evening.  Bummer.  I asked what time folks had to get there to get in for that evening.  Are you ready for this?  3:00.  That's right, these folks were going to be tailgating for about four to five hours to get in.  Here's what the tailgating looks like: Brainstorming time.  Where can we go?  Every restaurant we could think of on the way north was booked...  How about Sangiovese?  Perfect!  They could accomodate six on the deck overlooking the river.  Back south we headed.  But, wait!  What about the appetizers.  Well, being the intrepid adventurers we are, we ate them in the car.  That was a bit tricky because I'd packed anticipating a tailgate where I could put them together.  But, thanks to Liz unpacking the cooler for me and Pam holding the dish, we were in business. 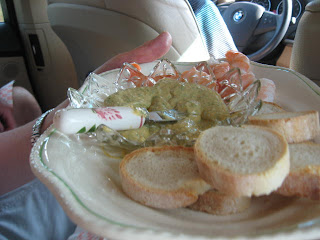 Now, one final thanks - to my lovely daughter-in-law Kara.  This is her recipe.  It's become my go-to for elegant finger food.   The sauce is delicious and an absolutely perfect foil for the toasted bread and the shrimp.  I first posted this recipe back in May of 2010.  But, it's so good I think it bears repeating!

Pulse the mayo, wing sauce, arugula and garlic in a food processor until it's relatively smooth.  Cut the baguette into 3/8" slices.  Lay the slices on a baking sheet and broil for 3 minutes on the first side and two on the second.  To serve, schmear some sauce on a slice of baguette and top it with a shrimp.
Posted by Kate at 6:10 AM

I can't believe you met Connie online! That's awesome. You know I met Hubby on the original Match.com; AOL in 1996. We lived in the same town so started dating right away and married 3 years later.

I also can't believe you got to meet Liz! I love her stuff. I'm glad you got a shot of her photo set-up. I always like seeing that behind-the-scenes stuff.

The crostini looks fantastic. Anything that uses wing sauce has to be awesome. :)

You made my blog today, too!!! LOVE that you documented the whole evening...what fun! And I'm SO glad to have this delicious recipe! Looking forward to our next adventure...xoxo