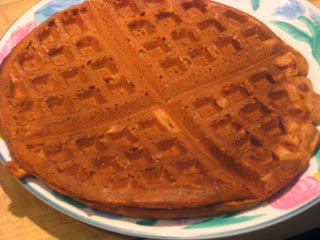 UGH!  Cold weather is here.  I'm just not a cold weather person.  And, I miss all the good stuff from the garden.  Our grocery cart will no longer look like we avoid fruits and vegetables since we'll have to once again buy them.  I'm trying here to think of the good things.  Nice comforting soups.  Fires in the fire place.  But, my feet are cold so it's tough!

Actually, one of the nice things is persimmons off our tree.  The biggest one day haul was 39.  That's a huge bowl full of goodness. 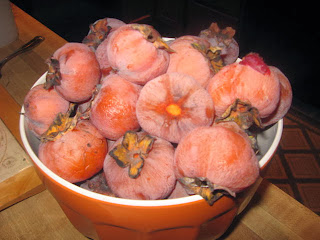 I've been freezing most of them for persimmon pudding.  I'll make that for Thanksgiving.  But, along the way a few have found their way into drinks and salads.  Connie's made a Persimmon Smash a couple of times.  And, I made a fun salad with carrot greens, blanched Brussels sprouts, chopped apple and a persimmon dressing.  But, one of my favorites is the persimmon waffles.  I used a recipe from Cooking Light for Pumpkin Waffles and substituted.  Now, if you're looking for lovely light, fluffy waffles, look elsewhere.  These have some heft.  They also were fabulous.

Mix flour, baking powder, salt, cinnamon and cloves in a medium mixing bowl.  Lightly beat the egg in a small mixing bowl.  Add the milk, brown sugar, vegetable oil and persimmon puree.  Stir to combine.  Make a well in the flour.  Pour the egg/milk mixture into the well and mix just until combined.  The original recipe called for   1/4 cup of batter per waffle.  They looked like this with 1/4 c batter. 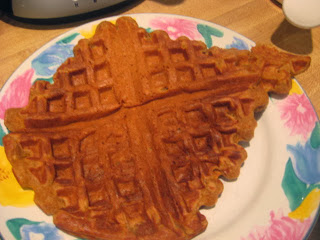 Much better with a full half cup.  Now, we're lucky enough to have shagbark hickory syrup available.  I took a hint from the latest cookbook from The Chew and added a bit of butter and bourbon to the syrup.  Yummy! 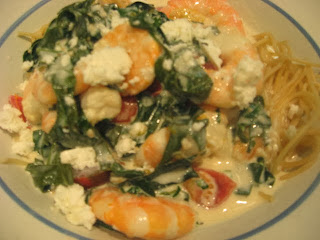 Well, it's Secret Recipe Club time again.  This month I got Christine's Kitchen Chronicles.  Christine and her hubby and little guy live right down the interstate from us in Cincinnati.  She taught herself to cook so she could keep up with the rest of her family.  And, did she ever teach herself to cook.

So, what we made was based pretty much on what we had on hand.  You see, not only did the assignments come out a bit late, but we're still dealing with the transition at the office AND the Connie's beloved Red Sox are in the playoffs.  As of last night they're heading to the World Series.  Saturday evening was the only time for me to try a recipe.  And, neither of us wanted to go to the store.  I'd pulled out recipes for two soups - tomato florentine and ham bone, bean and greens.  Both sounded hearty and wonderful.  But, Connie's not fond of soup...  I'd also pulled out a recipe for pasta with a chicken, bacon and mascarpone sauce.  That sounded good but we didn't have any mascarpone.  Finally, I'd pulled out a recipe for garlic bread you bake in a bowl.  We already had a huge loaf of sourdough bread so didn't need more.  Then, there was the lemon shrimp florentine pasta.  That'd be perfect with kale instead of the spinach.  And, even though I didn't have any boursin cheese, I'd make my own using a recipe of Emeril's.  So, here's the recipe.  And if you'd like to head on over to Christine's to see the recipe as she made it, here's where you go:  Lemon Shrimp Florentine Pasta.

Since I substituted kale for the spinach and used pre-cooked shrimp, I upended the directions.  Christine's original directions call for sautéing the garlic and shrimp then adding the tomatoes, stock, lemon juice, garlic, 2T of the feta and the boursin and cooking to to a saucy consistency.  Instead, I sautéed the garlic and kale then added the sauce ingredients.  At the end instead of tossing in the spinach, I tossed in the shrimp...  Serve with the rest of the feta and the toasted bread crumbs.  Christine found hers to be too sauce and I'd agree.  I tried to thicken it with a bit of cornstarch but that didn't work well... 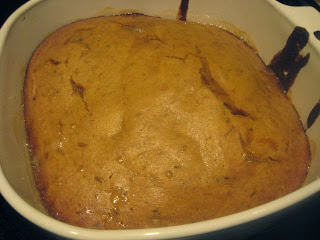 The Invasion of the Grunions


The Grunions is the name that Connie has for the grandkids.  Connie called David to remind him that the Avatar exhibit at the Children’s museum would be closing in the third week of September.  He happened to be on vacation so suggested that they come over that Friday.  Bradley (aka The Kraken) is in kindergarten now, so they didn’t get to Indianapolis until 2:30, but they had plenty of time to go the museum.  The museum opened a new area called Playscape for pre-schoolers.  It was only opened to members on this day, but since David is a member, no problem.  The Avatar exhibit was cool, but nothing compared to Playscape.  The kids would have probably stayed there for hours on end.  There is a water area, music, climbing, sandbox, art, and an area that has building blocks, a “Reaction Contraption”, and a “Whirly Twirly Tower” and lots more.  Wicked cool!


After the museum it was back to the house for a run through the sprinkler.  Then, of course, Bradley needed his mojitos.  Connie has taught Bradley how to make mojitos (virgin, of course) and Bradley never forgets to ask.  He knows where the muddler is kept and is always ready to help pick, sort and wash the mint leaves.  He is also a discerning character.  After they made the mojitos, Connie asked Bradley how they tasted.  Bradley looks at him and says, “I think they need more sugar water (simple syrup).  Good grief, another food critic!  So back in the cocktail mixer they go, more simple syrup is added and the concoction is re-poured.  “Much better”, declares Bradley.  The best part of the story is that Connie accidently used the hummingbird food which has LESS sugar than our normal simple syrup.  Bradley noticed.  Connie didn't.


We picked peppers for inclusion in the slaw we made for dinner.  We picked and ate golden raspberries right off the canes.  We picked tomatoes for the burgers for dinner.  Rosie, who normally does not eat tomatoes, walked around the garden munching on a large yellow tomato that she picked herself.  Bradley spent an hour climbing in a swamp honeysuckle.


However, the highlight of the evening was preparing dessert.  I've got a persimmon pudding recipe that was originally my great-grandmother's.  The woman I was named after.  We took persimmons out of the freezer.  These were persimmons that we had harvested last year from the tree in our front yard.  After thawing for a little bit, Rosie and Connie stood at the bar and pressed the persimmons through a colander to extract the pulp from the seeds and other detritus.  Rosie did this for a half an hour.  Her commitment to the process was amazing.  Bradley wanted to help also, but when presented with his turn, he couldn’t bring himself to stick his hands into the gooey mess, so Rosie jumped back in. 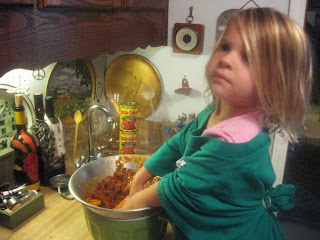 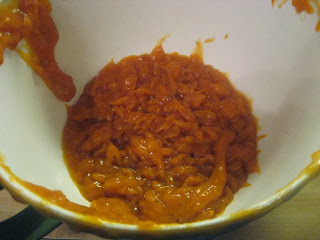 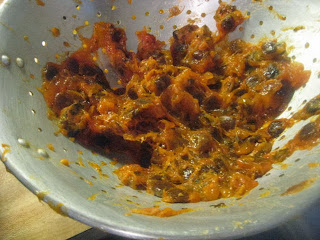 Pressing persimmons through a colander to make persimmon pudding is one of my fondest memories from my childhood about my grandmother.  Rosie used the same colander I used when my grandmother put me on a stepstool in her kitchen and let me smoosh away.   I think we may have passed the enjoyment of smooshing the persimmons on to another generation.  Rosie had a ball!  And by the way, the resultant pudding was inhaled by everyone.  It certainly is fun seeing the wee ones getting involved with cooking and preparing food.  Bradley loves making his mojitos and Rosie for the second time in as many visits, has stepped up and been involved with preparing the food. 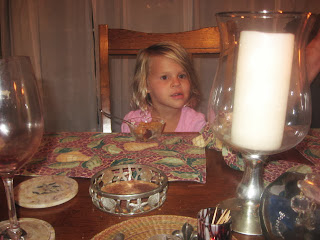 After dinner some of us were just plain tuckered out :-) 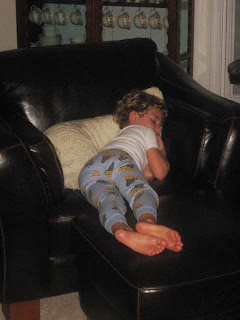 I'm doing something a bit different here... I'm copying the actual recipe card I have.  What you do is smoosh the persimmons thru a colander then mix them with the other ingredients.  Then, you pour the whole deal into a greased baking dish (I use about a 9x9 ceramic heat-proof dish) and pop it into the oven.  Serve with whipped cream.  Or we've found the new Cool Whip is so much like whipped cream that most folks can't tell the difference. 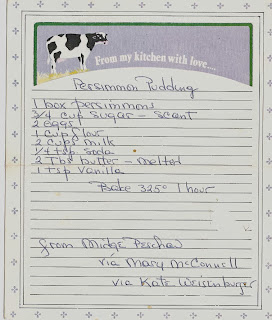