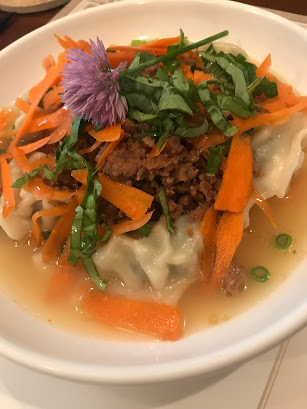 We joined a CSA (Community Supported Agriculture) this year.  After a less than stellar experience MANY years ago we decided to give it another whirl.  The fact that we pay a delivery fee and the veggies show up on our front porch is a super double bonus.  Market Wagon (the folks doing the delivery) majorly muffed the first week.  I was SO disappointed to miss all the goodies.  Particularly since I had my eye on a bag of pork and leek dumplings and a pound of frozen ground pork to go with the bok choy.  Well, we got lucky.  Week two Michael (the farmer) included TWO bok choys.

I’d gone on eatyourbooks.com to look at ingredient lists and the closest thing I could find was a recipe on the New York Times recipe site called Spicy Ginger Pork Noodles with Bok Choy.   It’s by Melissa Clark, whose recipes I normally love.  This one wasn’t an exception!  Although I’ll admit that I made some major changes.

Connie declared that the only reason this wasn’t a five for him was that it had some SOUP to it.  Soup, stew, whatever means it’s automatically downgraded.  That’s ok, I still gave it a five!

One funny story…  When I prepped my ingredients I did the normal quick rinse of the bok choy.  I ignored the fact that this was wonderful organic stuff and not from the store.  Then, I found a ton of dirt and a worm.  Ok, time to take it all apart and really turn on the cold water.  How lovely it was to have some fabulous fresh food!!!  I’m looking forward to our weekly baskets so much!

3 large cremini mushrooms, cut in half and then very thinly sliced

Separate the bok choy greens from the stems.  Chop them both about ½”.  Set aside.

In a medium saucepan, brown the ground pork.  Just before it’s finished (when it’s no longer pink) add in the mushrooms.  When the pork is browned, remove it from the heat and add the crushed ginger, soy sauce, rice wine vinegar, garlic and crushed red pepper.

Prepare the dumplings according to the package directions.

Sauté the bok choy in the olive oil.  Start with the stems and once they’re softened a bit, add in the greens.

Now, it’s time to put everything together.

In the bottom of each bowl put five dumplings.  In the center of the dumplings put a spoonful of bok choy followed by a spoonful of the pork mixture.  Ladle on ½ c of chicken broth per bowl.  Sprinkle with the carrot, basil and green onion.  Drizzle on the additional soy sauce and the sesame oil.

Adapted from Melissa Clark on the New York Times

Looks like a great recipe to jazz up a bag of frozen dumplings for dinner! Looking forward to trying this one. Thanks!