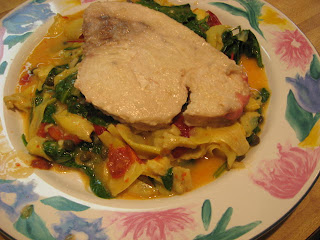 This is one of those recipes I just cannot believe I've not shared with all of you before.  You see, back in 2006, Connie did a bunch of traveling up to Buffalo, NY.  One evening he coordinated a trip with all of his coworkers to Niagara Falls.  They all had dinner at a place called the Red Lion Inn.  He had the best swordfish he'd ever had.  It was so good that he raved about it to me - all the time afraid he'd hurt my feelings by telling me what an incredible dish he'd had.  As you might have guessed, it didn't hurt my feelings, it piqued my interest.  I looked them up on the internet and wrote a note to the chef telling him what a fabulous meal my then-fiancé had had and asked him for the recipe.  I got REALLY lucky and he responded.

A couple of years ago we decided to drive to Cape Cod instead of flying.  The north route was to be a stay at the Red Lion Inn and a trip to Niagara Falls.  The only hitch to the get-along was that the chef was at his own wedding and the sous chef was really happy with the salt shaker.  So, happy that I sent my dinner back once and would've sent it back twice if my hubby hadn't been tsk'ing.  Breakfast the next morning was much better. And, it turned out the place was a lovely B and B.

Fast forward to this past weekend and swordfish was 50% off at the grocery.  Not only do you rarely see swordfish at our grocery but it's usually a small fortune. We bought a swordfish steak.  Since we've been trying to decrease the amount of protein and increase the fruits and vegetables in our diet, I doubled the veggies that went along with this.  And, since we were out of roasted red bell peppers, I substituted peppadews.  Something I will probably do from now on. 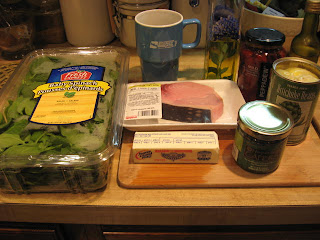 Remove the skin from the swordfish.  Butterfly the fish.  Lightly flour both sides. 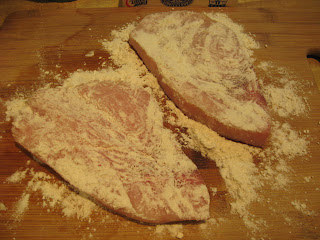 Heat the oil to shimmering so the pan is really hot.  Sear the fish on both sides.  Remove the fish from the pan, reduce the heat and melt the butter.  Swirl in the wine and lemon juice.  Add the other ingredients and cook until the spinach has wilted 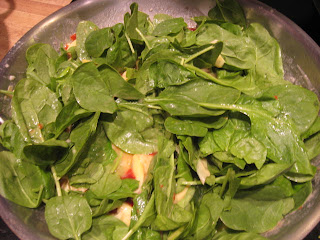 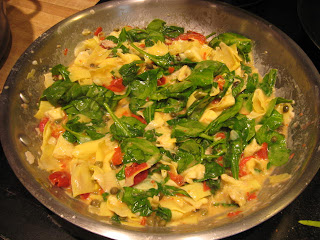 and the butter sauce coats the back of a spoon.  Serve the fish on top of the sauce.

adapted from the Red Lion Inn
Posted by Kate at 8:57 AM

I love that the chef responded to you and your request!